Good posture is so important, as any good old wives tale will tell you. Whenever I think of posture I always seem to think of a lady’s finishing school and people walking round with books on their heads. Why this would make for good posture I don’t know, I think that I would probably instead be worry about what the book I had chosen to balance was saying about my sense of taste to the world. Imagine the scandal if there were no books left and I was forced to use a copy of The Davinci Code, what would the neighbours think?

I spend many an hour here in my studio staring at my computer, cutting up waveforms and moving faders. The trouble is that I am pretty sure that the default position I assume to do this could be technically referred to as ‘The Slouch’. Now I’m no expert on the human body, you should see the state of mine, but I’m pretty sure that this will eventually lead to no good in the back department.

So being the kind of chap that will take any excuse to go and buy something off the internet, I decided to do something about it. After speaking to some people at work I realised that I should get myself an exercise ball. Now the thing about me and exercise is that I don’t like it, sometimes I don’t mind it, but generally it’s not top on my list of new and exciting things that I need to do today. If I’m going to do any of it, what I have to do is trick my brain into it before it can realise what’s going on. It is for this reason that I find an iPod such a useful thing. My brain gets all excited because it thinks that it is listening to a lovely bit of music and before it can realise what’s happen, it finds out that it’s been for a walk or been down to the gym. Ha! Body 1 Brain 0.

The good thing about an exercise ball I was told, is that just sitting on the thing is good for you, something to do with core muscles apparently. So I thought that rather than spend my days slouched in front of the computer with my face pressed to the screen, I would in fact spend them sitting on top of a large inflatable ball.

Once I started looking around on the internet and seeing the myriad of balls out there, I thought that I would need to do something to make mine stand out from the crowd. Obviously I though that I could simply do something like this:

However I though that this might require me to practise for a few minutes and frankly I’m sure that most people are able to do that. Then I stumbled across a website called Furriballs. Obviously you have to think twice before clicking on the link, but trust me, it’s not what your warped brain might think it is. It’s actually a very nice little website that sells furry ball covers.

Before I knew what was happening I had ordered one and it arrived yesterday. Here it is in all it’s glory: 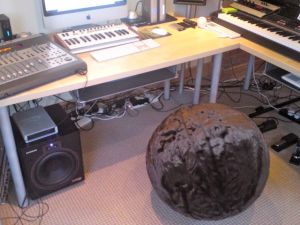 So there we have it, I am sitting atop it now as I type this. Very nice it is too, fluffy and more than a little bit bouncy. Everything a growing boy needs.

Until next time, bounce as you were,