On the September 20th 2010 my second single Tonight will be released. To celebrate this I thought that I should tell you a little bit about the song and how it was recorded. Firstly here it is, why not have a listen to it? (Or buy it if you’re feeling generous):

Tonight is actually a fairly old song that I have had knocking around in various versions for years. In a similar way to Make It Better, the song started life a fairly rough guitar and vocal demo that I recorded in my bedroom on a 4-track tape machine back when I was considerably more youthful.

As with many of my songs, I have gone through a number of different arrangements and recordings before I was happy with the final version. I really wanted the songs to have a dreamy, swirly quality with lots of strings and harmonies. I think that I managed to get there in the end.

While I was recording Tonight, I became a little bit obsessed with a with a piece of studio equipment known as a Harmonizer, made by the company Eventide. There have been a number of different models over the years but they all have the same basic look, with a keypad and dial on the right and a screen with four buttons underneath on the left.

The reason I became curious about them was that I noticed that seemingly whenever I saw a photograph of the inside of a professional studio, I could always see a Harmonizer in a rack somewhere in the studio. This is probably partly because they all share the same look I described above, but despite that they just always seemed to be present. I have only actually visited a proper studio a few times, I have always been more of a DIY music maker myself, but I remember one occasion where my Dad took me to visit Duran Duran in the studio. They had converted a house in London into a studio and they were recording The Wedding Album (the one with Ordinary World on it).

I remember quite distinctly that next to the mixing desk there was a rack of equipment and there were a number of Harmonizers in it. But what is a Harmonizer? I remember asking my Dad on the drive back home and he told me that were effect units, they did pitch-shifting, reverb, delay, chorus and so on, and they very expensive indeed.

I think it must have been the name that kept rattling around my brain, a Harmonizer. I’ve always had a big thing about harmonies and in my head I think these units started to morph into effects units that could automatically create lots of lush harmonic arrangements for you. When my interested in them got reawakened I though I’d investigate them a bit more.

We’re in the age of the internet now, there’s probably lots of information about them on the net now, probably loads of videos on YouTube. I’m sure I’ll even be able to pick up an old unit on eBay for next to nothing, in fact there will surely by now be a virtual plugin version that I’ll be able to use on my computer.

Well it turns out that I was right and wrong about all those things. There is information about Harmonizers on the internet, but to be honest it’s few and far between. You can find old units on eBay, but even the 30 year old models still go for an eye watering amount of money. When I looked on YouTube though, I thought that I had finally stumbled on to some good news. There is a virtual plugin version made by Eventide themselves and there is a video showing the different kinds of effects it can do.

It looked very interesting, I particularly liked the doubling effects on the vocals and guitars. The other thing I noticed on YouTube was the 90% of the videos uploaded about Harmonizers were about guitar effects. When I went to the Eventide website though, I discovered a problem. Not only are the plugins very expensive indeed, they are also only compatible with Pro Tools HD systems. Unfortunately this means that as well as buying the Pro Tools software, you also have to buy seom very expensive hardware that goes with it.

Sadly that puts it significantly out of my budget range and I don’t really fancy remortgaging the house right now. Pro Tools HD systems really still are in the realm of the professionals and although home recording has advanced much over the past decade and things have become cheaper and more available than ever before, it would seem that Eventide would still like their effects and equipment to remain there for the foreseeable future. Oh well, if Eventide change their mind ever, I’ll be waiting.

I’m not going to give up there though, I thought. I emailed a music magazine I really liked called Sound On Sound about Harmonizers and they pointed me in the direction of some other plugins that perform effects similar to what Harmonizers can do. I took a look at Discord 3 by Audio Damage which was very good indeed and did some very nice effects.

Somebody also pointed me in the direction of an effect that I already owned, but had completely overlooked. I already use Guitar Rig 4 by Native Instruments for most of my guitar recording, I used it a lot on Make It Better as well. However there is an effect called Christal that I never really explored. 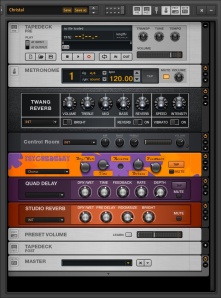 This effect is similar to one of the classic Harmonizer pitch-shifting delay effects. I plugged my Telecaster in and started picking out the chords to Tonight. Suddenly I felt the whole tone of the song change and it was much more in tune with what I wanted the song to sound like in my head. I ended up dumping everything I had done up to that point and started again with everything based around that guitar part.

The song now had a much more dreamy organic feel and I started adding more and more instrumentation very quickly including strings, electric piano, lots of vocals and more guitars. Inspired in part by Imogen Heap, I added a lot of percussion sounds made from sounds I recorded of myself including breathing, clicking fingers and so on. I’m fairly sure there is even some beard stroking in there at some point.

And that was that. I decided that this version of the song was bar far the one that I liked most, so I locked it down and stopped myself tampering with it any further. Finishing this song was actually one of the things the convinced me to actually stop tinkering with my songs, but to finish them off and start releasing them to everybody else.

I do hope that you enjoy,